Universal binary serializer for a wide variety of scenarios https://discord.gg/FGaCX4c

Based on the "Serialization" category.
Alternatively, view Ceras alternatives based on common mentions on social networks and blogs.

InfluxDB is the Time Series Platform where developers build real-time applications for analytics, IoT and cloud-native services. Easy to start, it is available in the cloud or on-premises.
Promo www.influxdata.com

Do you think we are missing an alternative of Ceras or a related project?

Ceras is a binary serializer. It converts any object into a byte[] and back. It goes above and beyond in terms of features, speed, and comfort. Supports reference loops, large/complicated inheritance chains, splitting objects into parts, ...

Ceras generally ranks at the top end of the performance spectrum, together with NetSerializer and MessagePack-CSharp. To get an idea of how Ceras performs here are the preliminary benchmark results. The resulting binary size is about the same as MessagePack-CSharp. 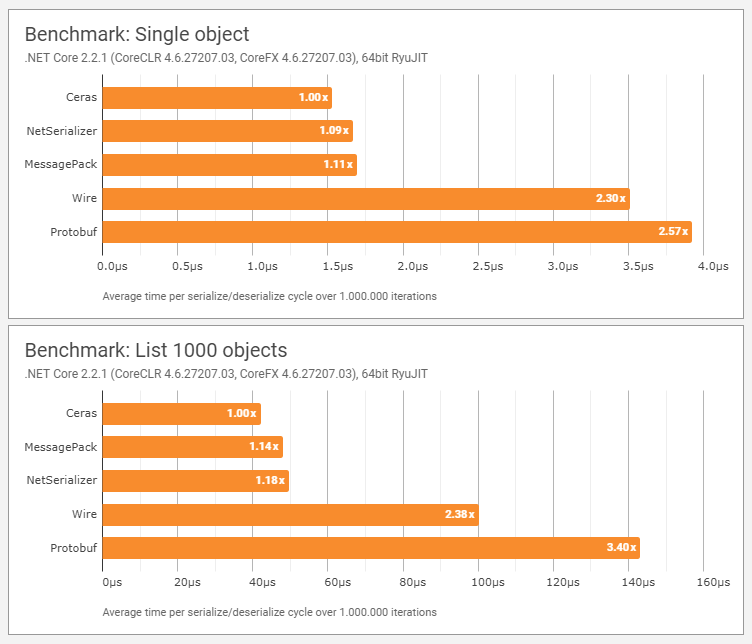 The shown results are obtained from this code and I encourage you to not only try it yourself, but to also provide feedback about scenarios you had good and bad results with.

Don't forget to tune the settings in SerializerConfig for your specific situation. Using Ceras to read/write network packets might require different settings than, lets say, saving a settings-object to a file, or persisting items/spells/monsters in a game, or ...

The project is still heavily work-in-progress, meaning that over time more optimizations will get implemented (your feedback is important here!).

What can this be used for?

The primary goal is to make an universal serializer that can be used in every situation. Personally my primary intentions were easy object persistance and network communication. I've added many features over time and whenever someone can think of a good scenario that should be supported as well I'll make it happen.

When should I not use this?