Microdot is an open source .NET framework that answers a lot of the needs for easily creating microservices.

Based on the "Application Frameworks" category.
Alternatively, view Microdot Framework alternatives based on common mentions on social networks and blogs.

InfluxDB is the Time Series Platform where developers build real-time applications for analytics, IoT and cloud-native services. Easy to start, it is available in the cloud or on-premises.
Promo www.influxdata.com

Do you think we are missing an alternative of Microdot Framework or a related project?

Microdot is an open source .NET framework that answers a lot of the needs for easily creating microservices.

Some of its main features:

Read on for an overview of the framework, and check the wiki for more details and a tutorial for building your first service.

The Microdot framework helps you to create scalable and reliable microservices (a "microservice chassis"), allowing you to focus on writing code that defines the logic of your service without the need to tackle the myriad of challenges of developing a distributed system.

Microdot implements and supports many established Microservice-related patterns. Below is a comprehensive diagram created by Chris Richardson of Microservices.io, with added color highlights to show which parts are implemented in Microdot (yellow), which are planned to be implemented (purple) and which patterns are not implemented but can be easily incorporated (blue). 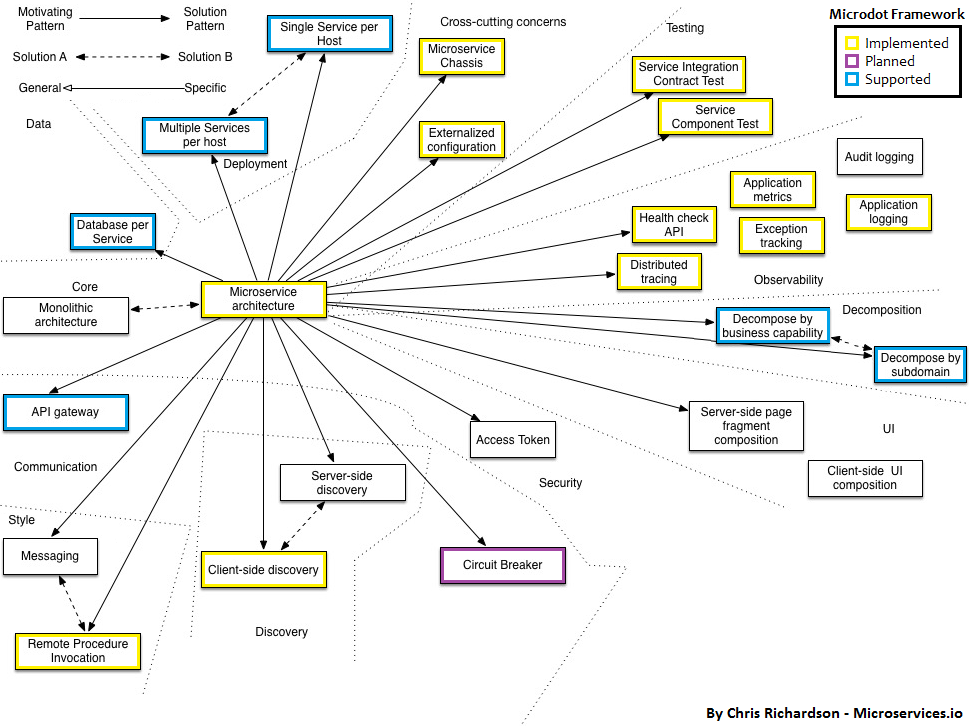 Microservices.io contains a lot of useful and well-written information about the microservice pattern/architecture and the difficulties of implementing it correctly. If you are new to this architecture, it can help get you up to speed quickly and will likely help you utilize Microdot to its fullest.

Microdot provides integration with Microsoft Orleans which, in turn, provides:

You may choose to implement your micro-services over Orleans or not (or just some of them). In general, you're probably better off using Orleans, but in certain cases you might want not to, e.g. if you have a stateless service that requires no internal consistency or coordination -- such as an API gateway, a repository on top of a database (that handles the concurrency), pure functions such as complex calculations, image or document processing or generation, or a proxy service to external systems.

The rest of this document uses Orlean jargon such as grains and silos. It is highly recommended to familiarize yourself with those basic concepts by reading this short introduction to Orleans.

The easiest way to start using Microdot is by adding the Gigya.Microdot.Orleans.Ninject.Host NuGet to a Console Application C# project. This will also install its dependencies, which includes everything you need to build your service. Then will need to:

This section details the architecture of Microdot at a high level, without going into too many details. 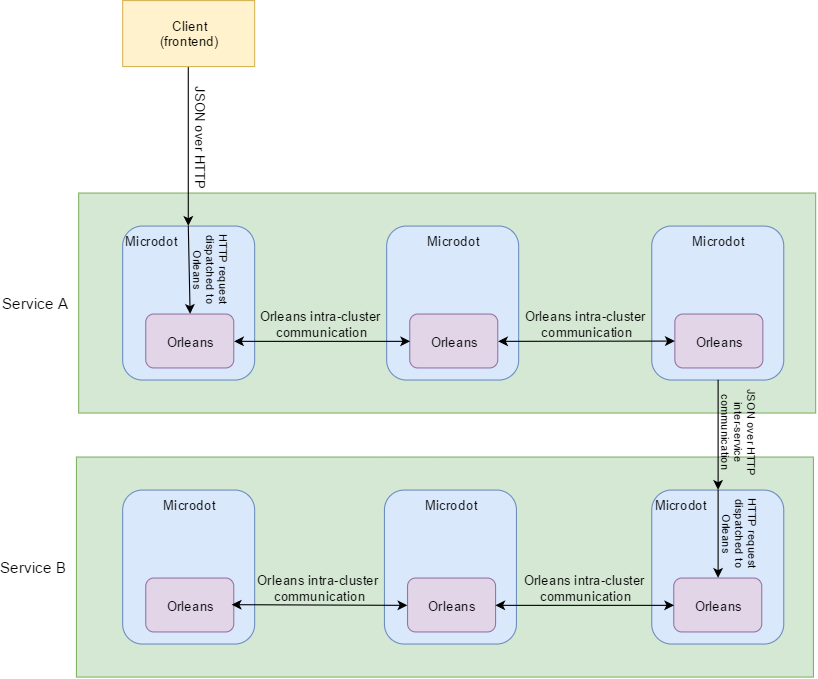 A service (green) is composed of several nodes, each one is a Microdot host (blue) that is running an Orleans Silo (purple). The host accepts RPC calls via JSON over HTTP and forwards it to the Silo. Calls to the host can come from clients (yellow), e.g. frontend, or from other services. Each Orleans Silo is part of an Orleans cluster, and every Silo communicate with other silos in the cluster using a propriatary binary communication protocol. Each Silo in an Orleans cluster also connects to a Membership Table (e.g. ZooKeeper, Consul, Azure or other high-availability database), which it uses to discover other Silos in the same cluster (not shown in diagram).

Each node is composed of a Microdot host which contains three main components: HttpServiceListener (dark blue), Service Grain (orange) and other grains (white).