An ASP.NET Web API HTTP caching implementation both on client and server

Based on the "Caching" category.
Alternatively, view CacheCow alternatives based on common mentions on social networks and blogs.

Do you think we are missing an alternative of CacheCow or a related project?

An implementation of HTTP Caching in .NET Core and 4.52+ for HttpClient, ASP.NET Web API, ASP.NET MVC Core and Carter.

This document covers topics below:

There are quite a few changes in the server-side implementation of CacheCow due to shortcomings of previous approach while the client-side mostly remained the same. Hence if you have used CacheCow.Server in the past and you would like to migrate, read the guide on migration further down. CacheCow.Client has some changes which may or may not break your code (depending whether you had used .NET 4.5 packages) which includes:

It is useful to start with concepts but feel free to use it as a reference. If you get bored reading this 😀, jump straight to Getting Started sections or simply browse and run a couple of samples.

Client scenario is perhaps the most common use case of CacheCow. Most of the concepts discussed above relate to the server-side. Client-side CacheCow has been implemented as a DelegatingHandler and has very few concept counts - most of the complexity of HTTP Caching has been hidden away from you. For the purpose of this guide, we choose an In-Memory storage which is the default.

2) Use ClientExtensions to create an HttpClient (piped to a CachingHandler fronted by HttpClientHandler):

This is simply a helper and you saves you writing a couple of lines of code.

As you can see, second time round the resource came from the cache and the request did not even hit the network.

NOTE: In-Memory storage is OK for test scenarios or cases where the load is limited. In many cases you would choose to use Redis storage or you can implement your own if you need to. If you would need an alternative storage not yet supported, feel free to discuss by opening an issue before sending a PR.

From CacheCow 2.0, ASP.NET MVC Core scenarios are supported. Server-side CacheCow has been implemented as a Resource Filter.

Provide the expiry as the first parameter (number of seconds):

Here we have set the expiry to 5 minutes. This covers the basic scenario, browse the samples for the advanced and efficient use cases.

Web API has always been supported by CacheCow but the server-side has been radically changed. There is no more a DelegatingHandler and all you need is to decorate your actions with the HttpCache filter.

Provide the expiry as a parameter (number of seconds):

Here we have set the expiry to 5 minutes. This covers the basic scenario, browse the samples for the advanced and efficient use cases.

CacheCow.Client and CacheCow.Server variants include diagnostic headers (x-cachecow-client and x-cachecow-server) to inform you of the actions taken and their results. They are useful in debugging and in case you would like to log them to understand cache hit ratios.

The header name is x-cachecow-client and can optionally contain extensions below (values separated by semicolon) depending on the scenario:

The header name is x-cachecow-server and contains extensions below (values separated by semicolon):

CacheCow project contains 3 sample projects that demonstrate how to use both client and server libraries. The samples are exactly similar in functionality, shared by CacheCow.Samples.Common project. Server is an API hosting functionality for adding, modifying and querying cars. it a command-line interface with 6 options to choose from:

After choosing options A, L or X application prints the value of the CacheCow header from both client and the server. These values will denote the caching actions taken and their result.

You can test and try different scenarios. For example:

You can run this sample on Windows, Mac and Linux and requires .NET Core +2.0. Essentially in your shell of your choice cd to the CacheCow.Samples.MvcCore folder and type:

This is a simple Web API example that displays out-of-the-box features for Web API. This sample is in .NET 4.52 and you can build and run as a console app on Windows.

This is an advanced Web API example that displays advanced features of server-side CacheCow, especially IoC. This sample is in .NET 4.52 and you can build and run as a console app on Windows.

This sample is for a typical Carter implementation. You can run this sample on Windows, Mac and Linux and requires .NET Core +2.0. Essentially in your shell of your choice cd to the CacheCow.Samples.Carter folder and type:

Scenarios in the Getting-Started sections above choose simple out-of-the-box options to get you started. Depending on the load on your server, these are not necessarily the optimal. To get the best out of your API's caching, you would have to do a little more work and help CacheCow optimise HTTP Caching. By default, CacheCow server relies on Serialising your payloads/viewmodels to generate ETag. While for low-mid traffic scenarios this could be sufficient, it would be detrimental for high-load APIs or cases where your payload is big. That is why, instead of leaving CacheCow to generate ETag (rather TimedETag) by serialisation, you could supply it yourself.

There are two times when a TimedETag is needed:

TimedETag when serving the ViewModel

TimedETag needs to be included in the response headers (in the form of ETag or Last-Modified headers). If your view models implement ICacheResource, CacheCow will attempt to get TimedETag by calling interface's only method. Otherwise it will use serialisation unless you provide an alternative ITimedETagExtractor implementation that extracts the TimedETag. And example would be an implementation that uses LastModifiedDate field and turns it into an ETag by binarisation (example here).

TimedETag when carrying out validation

This is the preemotive validation of the resource in response to conditional GET (or PUT/PATCH/DELETE). In case of a conditional GET, client requests for a later version of the resource unless it has changed since it has had its version, providing its last modified date or ETag(s). In this case, by default, CacheCow allows the call to controller to load the view model and then generates its TimedETag (by querying ICacheResource or serialisation). If the version the client has is still the most recent, it will send back status 304 or NotModified. While this reduces network traffic and reduces server (and client) resource usage, it does not relieve pressure from your back-end services. That is where ITimedETagQueryProvider interface comes into play: by implementing this interface you could go back to your back-end store and check whether the condition is met without loading the whole view model from the back-end services. For example, you could go back to the record requested and check if the LastModifiedDate matches.

This table highlights different options in CacheCow.Server and value associated with each. 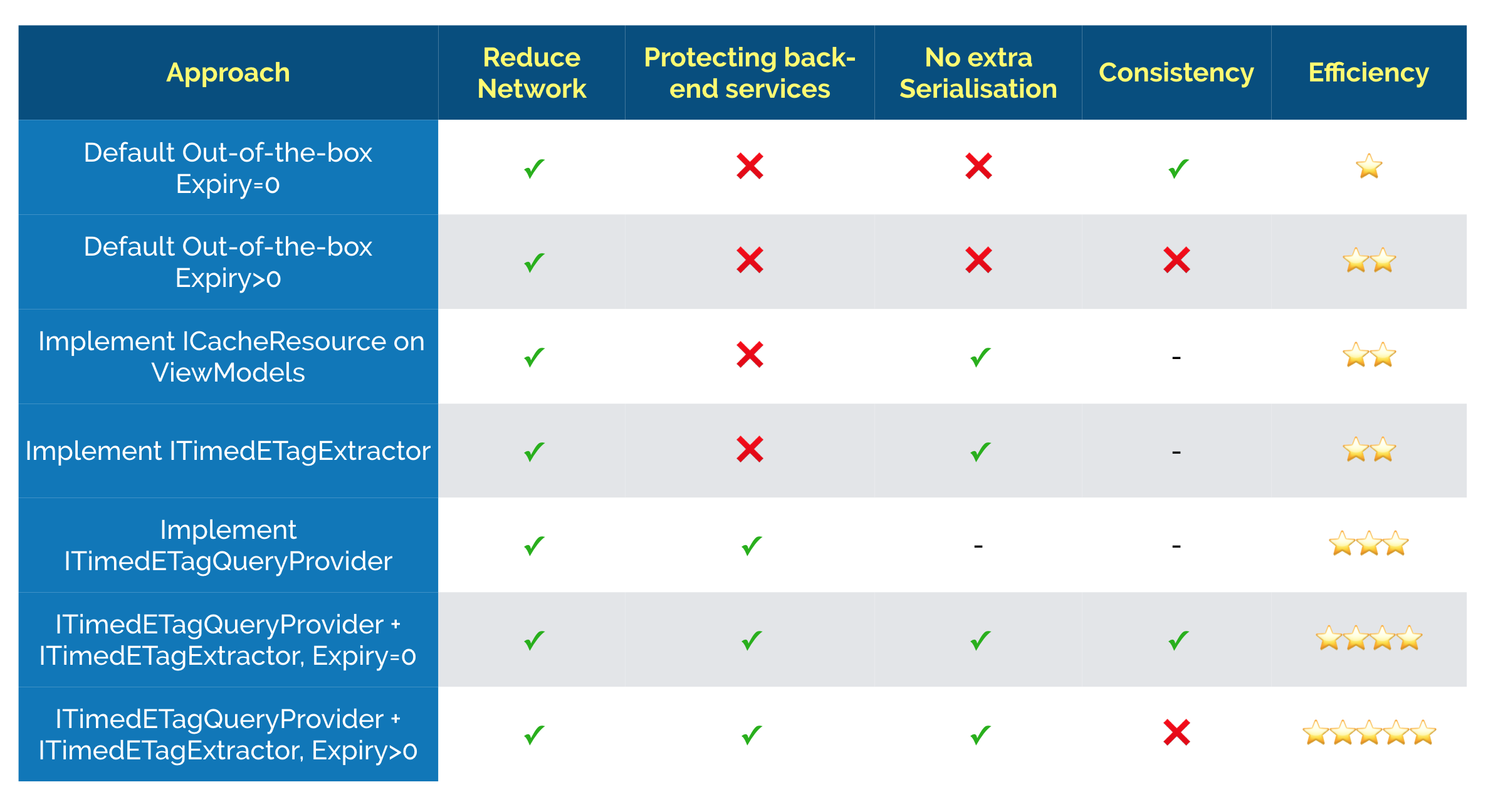 ASP.NET Core can already integrate with Dependency Injection frameworks and supports resolving its own dependencies through such abstractions. One of the challenges with server-side CacheCow is that there interfaces such as ITimedETagExtractor or ITimedETagQueryProvider would have implementations that would be different for different resources (rather view models). For example, if an API serves 3 entities as Customer, Product and Order you would need 6 different implementations, one for each entity and one for each collection (e.g. IEnumerable<Customer>). It would be certainly cleaner to have one implementation per each and somehow know the view model type of each action. Looking at the return type is an option but quite commonly actions return IActionResult.

So the solution is to let the filter on the action define the type of the view model. Hence, for example, on a CarController's Get action, you would define ViewModelType in the attribute as below:

The same applies to ITimedETagQueryProvider<T>, essentially: 1) define ViewModelType on filter 2) implement generic interfaces 3) register them in your container

CacheCow uses Options Pattern to allow consumers to configure a few options at the time of using AddHttpCachingMvc. Currently you can control whether to emit CacheCow diagnostic header (for now default is true) and also whether respect configuration:

If you enable configuration (using EnableConfiguration = true), CacheCow will try to read expiry values from .NET Core's IConfiguration. For example using the appsettings.json below, you can override the settings defined in the attribute:

Example below assumes a controller of "Test" and action of "Get" and it sets the cache expiry to 10 seconds. The value of controller and action are picked up from the route data and the keys need to be defined under "CacheCow" entry.

At this point, there is also "Enabled" property that can be set to false to disable CacheCow for a particular controller/action - something that might be handy during development. For example, setting environment variable "CacheCow_TestGet_Enabled" to "false" will turn off CacheCow functionality on action Get of controller Test.

You should first register default types in your Web API Dependency Resolver:

The rest to use ITimedETagExtractor<T> and ITimedETagQueryProvider<T> is similar to ASP.NET Core: simply define ViewModelType and register your dependencies.

Almost all projects using CacheCow.Client would carry on working in version 2.0. But servider-side implementation has been radically changed and in many ways simplified. In order to migrate: